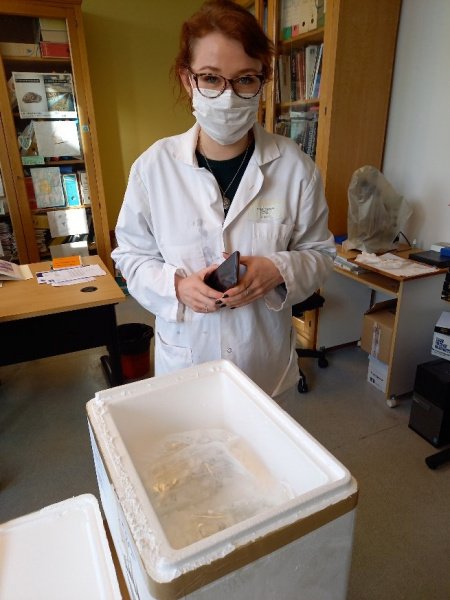 Lots of news since January! It’s time to catch up with you all! WP4 was ever so quiet because we were waiting for the oyster samples to arrive from England. Now that we have received Zoe’s shipment of oyster samples in dry ice, there is a lot of exciting work ahead!
Céline Renault, a student in Master of Science in Marine Sciences, joined us on January 17th for a six-month training period. She will be in charge of molecular and histological approaches. During the month, we received the samples weekly and all of them have now arrived. Firstly, we sorted all of the oyster samples. Then we started grinding them in liquid nitrogen. We are currently extracting RNA and genomic DNA and so are crossing our fingers that we will not have any problems with RNA degradation. Then we will measure targeted gene expression by qPCR. In the meantime, we have been able to access the genes Olie libraries. We have analysed these sequences to identify some target genes and designed the primers for these genes in Ostrea edulis. We will keep you updated on our experiments. We are looking forward to getting the first data to share with you!

It’s been quite exciting at Bournemouth as we have started to receive our data back from suppliers who have been processing our seaweed and benthic samples from our busy field work season in 2022. Annesia was also able to present project findings at the British Phycological Society hosted in Swansea, Wales. This was an excellent opportunity to connect with other scientists studying seaweeds and share our data.

We have also been analysing our data from our water quality sonde which we have deployed in Poole Harbour since the beginning of the project, which gives us an excellent overview of what has been happening in Poole Harbour and once we are able to analyse the data, we will be able to see how tidal flow, rainfall and other inputs effects this environmental data.
Finally, we have confirmed that we have data every 15 mins from over a full year from our HL7 multiparameter sonde deployed in Poole Harbour (Holes Bay) where we are actively monitoring nitrate concentrations. The 2021 monitoring season showed interesting results of the monthly changes which are being investigated more to explain rainfall, river, and tidal flow influences. Work in 2022 will continue monitoring with multiparameter units (nitrate sondes) and analysis of influences on nitrate concentrations from rainfall and river flows.

Automatic detection of seaweed mats on the foreshore using high-resolution satellite imagery was implemented last summer on the 4 study sites. The algorithms developed by ARGANS-FR using data from the Sentinel-2 A and B satellites (ESA/Copernicus) make it possible to estimate the algal cover on the foreshore with a spatial resolution of 10 metres. The results are provided to our partners in the form of maps showing the different types of vegetation detected with a colour code. The detection of seagrass and salt meadow cover was carried out on winter images in the absence of green algae. The detection of green algal mats is performed daily on all new images received. The images presented here are examples of detections made at the sites during the summer of 2021. The feedback from the measurements carried out during this summer in the field will allow the detection algorithms to be validated and improved if necessary. In addition to measurements, very high spatial resolution images (3 meters) were bought to provide another validation of the developed algorithms.

“In order to detect green algal mats on mudflats, ARGANS used high spatial resolution images from ESA satellites Sentinel-2A and Sentinel-2B. Thanks to the resolution, which is 10 meters, ARGANS are developing an algorithm which detects the position of green algal mats on mudflats and other types of vegetation at Le Trieux, La Baie des Veys, Langstone Harbour and Holes Bay.

Identifying and understanding habitats suitable for seaweed is an important aspect for CEFAS. In Langstone and Poole harbours, historic data on seaweed extent has been collated from the Environment Agency. This data has enabled the team to begin developing hydrodynamic and spatial biomass models.

The simulations shows results from the model in Poole Harbour.

The hydrodynamic flows are driven by tidal and river forces. Starting from zero initial concentrations, nutrient loadings from the main rivers are imposed and the results show nutrient concentrations building up in Poole harbour over 14 days.
The model also gives estimates of bed stresses and intertidal inundation information that will be used later in the project to try and predict macroalgal mat occurrence.

We are two years into the project and as soon as we are able to put in the results that have been collected by our project partners, we will be able to have greater confidence in the seaweed spatial hydrodynamic models. 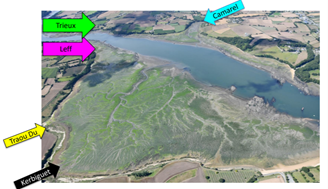 CEVA have been busy all year, collecting seasonal and monthly samples on the Ledano mudflat. A years’ worth of samples has now been sent off for genetic, CHN and sediment analysis and we are looking forward to getting the results back! Looking to the summer, we are planning the removal works which will allow us to look at direct interventions to reduce algal mats collected in the Trieux. 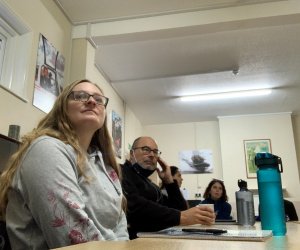 Natural England’s Thames Solent team continues to work closely with stakeholders that have an interest in this project. The project is fielding interest from seaweed and shellfish farmers, water companies, rivers trust, coastal partnership-groups, and local authorities. Among the focus audience, we aim to drive awareness of the project, evidence being achieved, and to encourage actions that can be advocated.

During recent meetings and conferences, stakeholders are being provided with the opportunities to have conversations about the project and how it contributes to their interest, that varies from seaweed kelp farming and oysters farming to sequester carbon and other nutrients, that could be utilised for trading or offsetting within net-zero programs.

Use of marine worms that are being fed using algal mat, and biochemical extracts from seaweed are also priority focus for some of our stakeholder’s conversations. Our future plans include water quality improvements and online interactive mapping tools, plus much more details that might be useful to you.

We are looking forward to hosting public workshops in autumn 2022.
Please get in touch if you have a question. 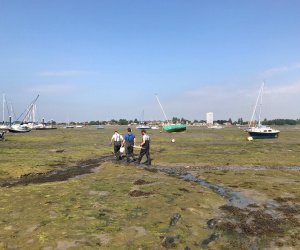 It’s been pretty busy at Portsmouth with monthly sampling on the mudflats, preparing the oysters to send to France, dangerous goods training, nitrate data analysis, various data analysis and frequent visits to the sonde in the Harbour.

In order to get the oysters to France, Zoe had to undertake a three-hour exam to ship the samples, which have been prepared by Eric and stored in ethanol. They have finally made it to France which is great news! Work has also begun on analysing the data from our seasonal sampling, including looking at nitrate levels in the oyster tissue and how the algal mat density effects the benthic communities found in the sediment. We are also looking at the genetic data we’ve had back so we have been able to identify the different species in the mat as it develops over the year.